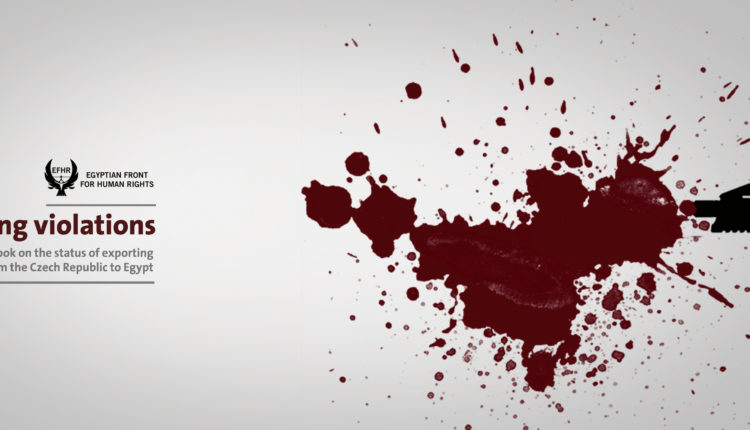 At a conference held by Egyptian Human Rights Forum, Amnesty International, the Euro-Mediterranean Network of Rights and the Egyptian Front for Human Rights and the Egyptian Artist Khaled Aboelnaga in the Czech capital, Prague, a conference today issued a warning about the role of Czech weapons in the deteriorating human rights situation in Egypt. The conference reviewed the report launched by the Egyptian front today under the title: “Export violation: on the export of light weapons from the Czech Republic to Egypt.”

The Czech Republic, despite being a signatory to the Arms Trade Treaty and belonging to the European Union Council that has a unified position on prohibiting the export of arms to countries violating human rights, continues to arm the Egyptian security forces with varying light weapons, which have amounted to more than 41 million Euros in 2016. Regardless of accusations of committing massive and widespread violations directed at the Egyptian government. The authorities, inclusive of current President AbdelFattah ElSisi, always justifies its oppressive practices under the pretext of its war on terror.

This report “Exporting violations” aims at exposing the Czech Republic’s collaboration in the oppression that Egypt has lived through since summer 2013, through supplying the Egyptian regime with arms for over 7 years, severely violating the right to life, methodologically comitting crimes of torture, forced disappearance, and arbitary executions, in addition to violating the right to organization and assembly and restricting freedom of opinion and expression, which counts as a breach for the international commitments of the Czech Republic as a signotary state to the arms trade treaty and a departure from the European stance on the case of exporting weapons to Egypt following July 2013.

The report is divided into four main sections: The first section showcases the most prominent violations committed by the Egyptian authorities in the years following July 2013, where it is suspected that Czech arms were used in its commitment, such as extrajudicial killing, forced disappearance, torture and violations within the war on terror in Sinai, which counts as internal acts oppression practiced by the authority that should by default lead to banning exporting weaopons to it, according to the arms trade treaty signed by the Republic of Czech.

While the second part of this report tackles in detail the commitments of the Czech Republic regarding the export process, which stems from local law and the Arms Trade Treaty, which stipulates banning the export of weapons in case they are used in acts of oppression, violation or breaching international treaties. In addition to the unified position of the European Union Council and EU Parliament decisions regarding Egypt since July 2013 including their recommendations of halting the export of equipment and military technology to Egypt in the light of the soaring violations against human rights.

The third section of the report sheds light on the nature of the high diplomatic ties between the Czech and Egyptian authorities which can be interpreted in the continued influx of official delegations from both sides, including some businessmen in the defense industries, in addition to analyzing the figures contained in a number of reports by the Ministry of Industry and Trade in the period from 2012 to 2017, indicating the increasing value of arms exports and export licenses from the Czech Republic to Egypt.

The fourth section of the report highlights the nature of using Czech arms by the Egyptian security forces, on top of which the Interior Ministry, adding to the suspicion of using these arms in committing grave violations against citizens, such as using the CZ SCORPION EVO rifle during the dispersal of Nahda sit-in on August 14, 2013. Putting that together with what is revealed by the statements of both Egyptian and Cze ch officials to acquire a licence for manufacturing the Czech rifle CZ 807 inside Egyptian military factories.

The report relied on tracking transactions of arms exported from Czech to Egypt through analysing the figures issued by the Czech Ministry of Industry and Trade published on its official website in the period 2012-2017. It was also based on monitoring the violations by the Egyptian authorities against the figures in the reports of a number of Rights organizations inside and outside Egypt. The report was also based on the Egyptian authorities’ use of Czech weapons to analyze a large number of videos issued by the Egyptian Ministry of Interior’s official page and a number of videos recorded by several media platforms such as Al-Masry Al-Youm media outlet,  the Czech Foreign Ministry, and statements by the director of the manufacturer of Czech weapons.

The report proposes a number of recommendations, primarily to the Czech and the Egyptian government. Czech government should uphold its local and international obligations and immediately halt all arms transfers to Egypt until such time when the Egyptian government forces end abuses and ensure accountability for crimes committed. Because of the failure of the Czech government to make public information about weapons provided to Egypt in the past years as well as its failure develop and maintain effective mechanisms for the monitoring of the end use of such weapons, the Czech Parliament should commission an independent investigation into weapons transfer to Egypt.

Read the report in English