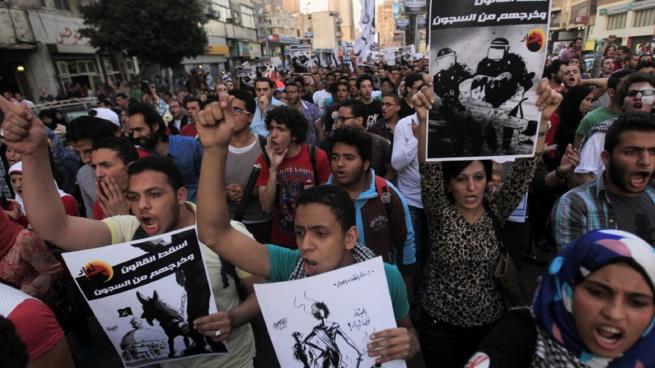 On January 24th 2020, in order to promote cooperation between European civil society and defenders in exile, to look back at the January 25th revolution and commemorate Giulio’s death, the Egyptian Human Rights Forum, in cooperation with Euromed Rights, the Milan Festival for Human Rights and Articolo 21 organised a panel conversation in Milan titled: “Egypt the jailing of Freedom”.

The event, attended by over 80 participants, discussed the current situation in Egypt and stressed on the devastating impacts of the Egyptian authorities’ tactics of harassment of journalists, bloggers and others who voice their opinions.

This year as every year, Egyptian authorities are gearing up against fears of public celebration of the anniversary of the January 25th revolution. Preventing measures are usually not limited to a display of force with heavily armored vehicles and soldiers patrolling Cairo’s downtown area but also include apartment raids, arbitrary arrests and the stopping and searching of cars and pedestrians. In 2016, Giulio Regeni was a victim of this intransigent system of repression. Today, despite the global outrage and reactions of the international community, not only the truth was not made on the gruesome torture and death of Giulio, but the scale of enforced disappearances has increased.

“Regimes like Egypt are much more interested in their reputation abroad than in their own countries.” – Wadih Al-Asmar, President of Euromed Rights

Last September, Egyptian authorities responded to a rare outbreak of protests with a massive wave of arrests, detaining more than 4,000 people, many at random, within a matter of weeks. Journalists covering the protests were not spared. With 26 journalists in jail, the Committee to Protect Journalists 2019 global survey places Egypt as third worst jailer worldwide in spar with Saudi Arabia.

“Egypt is a republic of terror” said the Director of the Cairo Institute for Human Rights Studies, Bahey Eldin Hassan in his intervention, “censorship and intimidation against truth seekers have become common practice: journalists, associations, researchers, Egyptian and foreign judges. What has been done to Giulio Regeni is a message addressed to everyone“

As civic space and freedom of expression disappear, citizens’ voices are silenced and the very existence of civil society is threatened. Without space to speak out, organise, and take action, the ideals brought by people’s uprising in 2011 are nothing but a sour memory that many have no choice but to keep silent, face repression or leave the country.

“The media coverage in Egypt does not help to understand what is really happening. Working in Egypt as a journalist is working in censorship and self-censorship, putting yourself and the protagonists of your stories at risk.” – Azzura Meringolo, Journalist with Rai Italia

In the past years, joint efforts between Italian civil society actors and Egyptian activists in exile have been very proficient in sustaining pressure on Egyptian authorities in calling for the truth on Giulio’s case. Such alliances between local and exiled activist communities are to be celebrated as the most efficient way to keep the Egyptian human rights movement alive.

This dynamic of cooperation between Italian and Egyptian parties came through the discussion as Erasmo Palozzotto, President of the investigative parliamentary commission on the death of Giulio Regeni deplored a lack of ambition from European officials in solving Regeni’s case: “The story of Giulio Regeni reveals the moral weakness of the Italian and European institutions. Giulio has become a symbol of a generation of unconscious victims of a battle between civilization and barbarism. Therefore we must demand truth and justice”.

Seeing an opportunity for Egyptian civil society groups to help to overcome this roadblock, Bahey Eldin Hassan suggested Palazzotto to “hold hearing sessions with Egyptian political, security and legal experts to assist the Italian parliamentarian commission in better understanding the Egyptian prosecution and security systems, and in revealing the truth on what happened to Giulio Regeni.”

For any request, please send an email to: info@egyptianforum.org

The Sixth Anniversary of the June Protests & July Coup d’état: An Appeal…