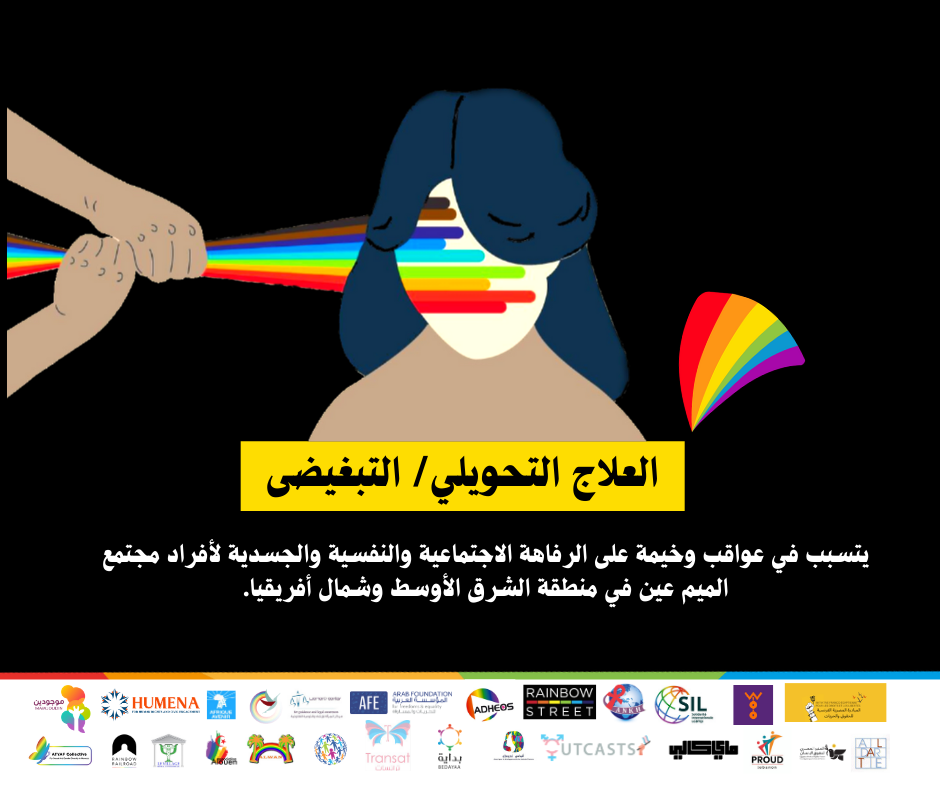 We, the undersigned organizations and movements, express our grave concern about the spread of so-called “Conversion Therapy” against the LGBTQI+ community in the Middle East and North Africa region.

We affirm that any attempts to distort and erase the identity, incite self-hatred and deny the existence of lesbian, homosexual, bisexual, transgender, queer, or intersex individuals, have serious consequences on their physical and psychological well-being.

‘Conversion Therapy’ is an umbrella term used to describe interventions of a broad nature, all of which share the belief that a person’s sexual orientation or gender identity can and should be corrected.

Conversion Therapy is practiced all around the world, according to a report by Victor Madrigal-Bolluz, the independent expert on protection from violence and discrimination based on sexual orientation and gender identity. He noted that “the practice of conversion therapy occurs in at least 68 countries.”

Recently, the calls for the practice of Conversion Therapy in the Middle East and North Africa region have spread on a large scale.

This kind of therapy has some dire risks including depression, anxiety, and isolation. It also promotes self-hatred. Individuals who have undergone this practice reported they were told that non-heterosexual people were generally lonely, unhappy, unaccepted, and disapproved by society. Such statements might escalate to suicidal behaviors in the impacted individuals.

Homosexuality Is Not a Disease:

Conversion Therapy practices are based on a harmful and discriminatory misconception in nature, implying that sexual and gender diversities are imbalances that must be corrected. It is also a medical practice based on the premise that sexual orientation and gender identity can be converted.

In 1973, the American Psychiatric Association removed homosexuality from the Diagnostic and Statistical Manual of Mental Disorders by a group vote of psychiatrists. In 1986, homosexuality was permanently abolished as a disease.

More recently, the World Health Organization decided in May 2019 to take out transgender health issues from its list of mental illnesses, thus acknowledging that it is “not actually a mental health condition.”

Additionally, the American Psychiatric Association opposed any psychological treatment, such as Conversion Therapy, because it is based on the preconceived assumption that homosexuality/gender diversity in and of itself is a mental disorder, and that the individual must change their sexual orientation.

As the American Psychoanalytic Association emphasizes, “As with any societal prejudice, bias against individuals based on actual or perceived sexual orientation, gender identity or gender expression negatively affects mental health, contributing to an enduring sense of stigma and pervasive self-criticism through the internalization of such prejudice.”

The American Academy of Child and Adolescent Psychiatry (AACAP) asserts that, there is no evidence to support the implementation of a ‘therapeutic intervention’ based on the premise that sexual orientation, gender identity, or consensual sexual expression can be converted.

AACAP confirms that such ‘conventional therapies’ lack scientific credibility and clinical benefit. Additionally, there is evidence that such interventions are harmful. Thus, Conversion Therapy must not be part of any behavioral health therapy for children, adolescents nor adults.

The practice of Conversion Therapy conflicts with the dignity and humanity of individuals and their rights, including privacy, self-determination, discrimination, and freedom from suffering and abuse.

Despite most of the major medical and scientific institutions denying the efficacy and feasibility of practicing Conversion therapy, this behavior remains common among a number of health professionals, who are practicing this type of therapy due to the widespread discrimination and societal prejudice against lesbian, gay, bisexual, transgender, intersex and queer people.

Therefore, the American Psychiatric Association recommends that “Ethical practitioners refrain from attempts to change individuals’ sexual orientation.. respect the identities for those with diverse gender expressions.”

The European Psychotherapy Association notes, “Practitioners should be careful when faced with clients/patients who ask for conversion therapy as such requests often mask other pressing issues.”

Media and the Myths About Homosexuality:

The Arab media plays a great role in promoting false information about homosexuality and gender diversity and even amounts to spreading unfounded myths about sexual orientation and gender identity.

It promotes Conversion Therapy based on imprecise or scientific information, false assumptions and discriminatory outlooks. It also contributes to the increasing and spreading of hate speech against the LGBTQI+ community.

Conversion Therapy is Torture, Not a Treatment:

The United Nations Convention Against Torture concluded that “These practices may amount to torture, cruel, inhuman or degrading treatment.”

Subjecting lesbians, gays, bisexuals, transgender, intersex, or queer people to ‘Conversion Therapy’ is an attempt to change their sexuality/gender identity, stemming from LGBTQI+phobia, hatred, and discrimination, and is considered a crime against humanity.

We reject and resist oppression in all its forms, including social oppression against many sexual and gender identities.

The right to equality and non-discrimination are two of the basic principles of human rights, enshrined in the United Nations Charter, the Universal Declaration of Human Rights, and human rights treaties.

The opening words of the UDHR are unequivocal: “All human beings are born free and equal in dignity and rights.” The guarantee of equality and non-discrimination enshrined in international human rights law applies to all people, regardless of their gender, sexual orientation, gender identity.

The United Nations Human Rights Treaty Bodies have expressed concern about conventional treatment practices. As the Special Rapporteur on LGBTQI+ Rights stated in a report on Conversion Therapy, “Actions to subject lesbian, gay, bisexual, trans or gender-diverse persons to practices of “conversion therapy” are by their very nature degrading, inhuman and cruel and create a significant risk of torture. States must examine specific cases in the light of the international, regional and local framework on torture and cruel, inhuman or degrading treatment and/or punishment.”

● We demand Conversion Therapy to be prohibited by the Middle East and North African governments, as it is a form of abuse affecting the individuals’ social and psychological well-being.

● We urge Victor Madrigal-Borloz, the UN Independent Expert on sexual orientation and gender identity, to investigate the matter and release an elaborate report to tackle Conservation Therapy.

● We call health professionals undertaking Conversion Therapy to halt this practice as a violation of professional ethics and a fraud.

● We ask mental health associations and medical unions in the Middle East and North Africa to denounce this blatant violation of the right of individuals and consider it a form of torture.

● We request the print and broadcast media to stop promoting unscientific myths regarding homosexuality, gender diversity, and Conversion Therapy.